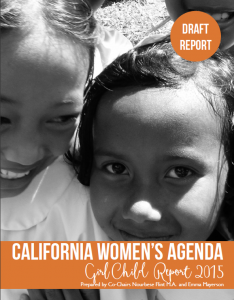 Following the UN4WCW Platform, the CAWA Task Force
on the Girl Child (Girls and Young Women of California)
agrees discrimination against women begins at the earliest
stages of life, and must therefore be addressed from then
onwards. The girl child of today is the woman of tomorrow.
Her skills, ideas and energy are vital to full attainment
of goals of equality, sustainable development and peace.
For girls to develop their full potential, they need to be
nurtured in an environment where their needs are met,
and their equal rights safeguarded.
The Platform respects and ensures the rights of each child,
irrespective of his or her parents’ or legal guardian’s’ race,
color, sex, language, religion, political or other opinion,
national, ethnic or social origin, property, disability, birth or
status.

The Girl Child
According to the 2000 census, the total population of California was 33, 871,648; 4,505,291 were girls (females under 18 years old).According to Kids Count, a project of the Annie E. Casey Foundation, California ranks 15th out of the 50 states in 10 key indicators of child well-being.

Education
• More California students scored below basic reading and math levels given to 4th and 8th graders than the national averages for these standardized tests.
• Between 1996 and 2001 the dropout rate for high school student went from 10% to 8%, a 20% decline.
There is a politically significant movement to assure Universal Pre Kindergarten (UPK) for California’s 3 and 4 year olds. Among the most articulate and powerful advocates for this initiative is California Children and Families Commission’s Rob Reiner. While there are differing opinions about how UPK should be implemented, child advocates are in agreement that it should be done. Please note that there are some powerful and highly politically charged statistics that we could use to challenge the administration’s current education policies. Do you want me to go there? Please advise. TTBS

Health
• 15 % of California children do not have health insurance.
• The Infant Mortality Rate (IMR) for California is 5.4 deaths per 1000 live births. While this figure is an improvement over 1996 data, and better than the national average, there are significant disparities in mortality and morbidity among different populations in California.
• The teen birth rate in California has declined significantly in recent years, from 38 to 24, or 37% between 1996 and 2001, and is now lower than the national average.
The most significant issue in children’s health is the movement to assure that all California children are covered by health insurance. The 100% Campaign and SB 840 (Kuehl) are examples of efforts to assure universal health coverage for California’s children.