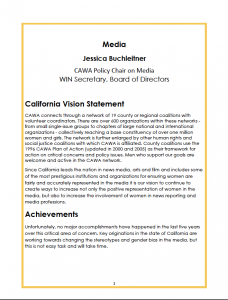 California Vision Statement
CAWA connects through a network of 19 county or regional coalitions with
volunteer coordinators. There are over 600 organizations within these networks –
from small single-issue groups to chapters of large national and international
organizations – collectively reaching a base constituency of over one million
women and girls. The network is further enlarged by other human rights and
social justice coalitions with which CAWA is affiliated. County coalitions use the
1996 CAWA Plan of Action (updated in 2000 and 2005) as their framework for
action on critical concerns and policy issues. Men who support our goals are
welcome and active in the CAWA network.
Since California leads the nation in news media, arts and film and includes some
of the most prestigious institutions and organizations for ensuring women are
fairly and accurately represented in the media it is our vision to continue to
create ways to increase not only the positive representation of women in the
media, but also to increase the involvement of women in news reporting and
media professions.

Achievements
Unfortunately, no major accomplishments have happened in the last five years
over this critical area of concern. Key originations in the state of California are
working towards changing the stereotypes and gender bias in the media, but
this is not easy task and will take time.

Obstacles Encountered
There are many obstacles identified regarding the representation and presence
of women in the media. This extends to women in film and television in addition
to women in journalism and media professions. Among the most prevalent issues
for women in film and television are the way female characters are portrayed,
the types of roles available to women in film and the lack of women employed
as film directors, studio heads or producers.
This appears to be the same case for women in journalism professions where
men dominate lead editor and producer roles in both newspaper and
broadcast journalism. Women are often given “lighter” stories to cover such as
fashion, entertainment, beauty or home and family oriented topics. Women’s
journalistic voices are absent from coverage of world events and politics.

Plan of Action for Women and Media in California

Barbara Ehrenreich noted in a Los Angeles Times Op-Ed about Abu Ghraib, “To cite an old, and far from naive, feminist saying: ‘If you think equality is the goal, your standards are too low.’ It is not enough to be equal to men. … It is not enough to assimilate. We need to create a world worth assimilating into.”

At a time when we (women) seem to be fighting way too hard for rights already won – control over our bodies, equal access to sports, protection from violence – we need to have a voice in our world so we can protect ourselves as well project ourselves as positive images in all societies.

How can women create this world? To begin with, we need to have women in decision-making positions within the traditional and independent media. Among communications companies in the Fortune 500, women on average comprise 12% of board members. Can women rely on the mostly-white, predominately male controlled TV, print, and radio outlets, to portray women accurately?

Obviously not. In order for women to move into full equality, in a world we can be proud of, we must get more of us into these powerful positions. And once we are in these positions, we must open doors for more women to follow.

Recent studies have shown that the percentage of top editor positions at mainstream newspapers was down to 20% in 2002, that a mere quarter of syndicated columnists are women, and that only 10 to 20% of op-ed columns are written by women. (The New York Times has only one female columnist, Maureen Dowd).

In a 2004 survey, women made up only 37% of the staff at newspapers nationwide, only 34% of supervisors, and women of color represent an appallingly low 6%. It has also recently come to light that women make up less than 4% of editorial cartoonists.

Other types of traditional media are also way lacking female decision makers. Fairness and Accuracy in Reporting (FAIR) discovered “women’s opinions also missing on television.” And this may never change, especially as women increasingly turn to alternative sources for news and communication, particularly the Internet, where there are a gazillion sites for women and girls. We no longer need rely solely on dailies or the 11o’clock news — the average person already spends upwards of 20 hours per week online.

As long as traditional media requires mega-dollars to exist and remains controlled by only a handful of big business entities, there will always be news slanted so as not to offend supporting advertisers or corporate owners. Amazingly, many now are willing go to the extreme to actively promote products and services. This has never been so blatantly honest as it is in Reality TV where product placement and product endorsement is omnipresent, openly acknowledged, and even accepted.

It will always be the job of independent and public access media to allow for the diversity of opinions and expressions all too often missing from traditional media.

For this reason, women must increasingly look to full ownership of independent media and demand equal decision-making roles in public access — until our voices are equally heard. As long as the current state of affairs continues, we will see women stereotyped, marginalized, downplayed — often living invisibly in a society in which we are more than half the population.

Status of Women’s Media in California

California leads the country in the number of women in media and media owned by women. A quick look at the women-owned publications reveals a slant towards ignored or falsely portrayed markets – girls, lesbians, professional organizations, education, nonprofits, political, literary, artistic, spiritual.