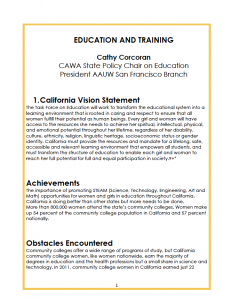 California Vision Statement
The Task Force on Education will work to transform the educational system into a
learning environment that is rooted in caring and respect to ensure that all
women fulfill their potential as human beings. Every girl and woman will have
access to the resources she needs to achieve her spiritual, intellectual, physical,
and emotional potential throughout her lifetime, regardless of her disability,
culture, ethnicity, religion, linguistic heritage, socioeconomic status or gender
identity. California must provide the resources and mandate for a lifelong, safe,
accessible and relevant learning environment that empowers all students, and
must transform the structure of education to enable each girl and woman to
reach her full potential for full and equal participation in society.
Achievements
The importance of promoting STEAM (Science, Technology, Engineering, Art and
Math) opportunities for women and girls in education throughout California.
California is doing better than other states but more needs to be done.
More than 800,000 women attend the state’s community colleges. Women make
up 54 percent of the community college population in California and 57 percent
nationally.
Obstacles Encountered
Community colleges offer a wide range of programs of study, but California
community college women, like women nationwide, earn the majority of
degrees in education and the health professions but a small share in science and
technology. In 2011, community college women in California earned just 22
percent of the associate degrees in computer and information sciences and 18
percent of the associate degrees in engineering, engineering technologies, and
related fields.

Education is an institution, an industry and economic engine, an issue, and an arena,
Education is a powerful tool, a tool for power and change for women and girls. And Education is in crisis in California – within the schools and within the profession itself and fueled by the policies and regulations that guide curriculum, school infrastructure, and funding.

Panelists at the CAWA CALL TO ACION, December 4th identified some of the education issues, priorities and challenges impacting the women and girls of California. Attendees made recommendations to help determine priorities for a 2005 education action agenda. The following is a summary.

Although California is spending more per student than they were 10 years ago, other states have invested more, and California ranks 22 in per capita expenditure, below the national average. However, during the same period California had above average per capita income. Nevertheless, it is argued that California residents face one of the highest costs of living in the country and are reluctant to tax themselves more. In addition, unlike most other states, California relies primarily on state funds for education rather than local property taxes. California’s state budget deficits have been well documented and reviewed with the issue of education funding being severely impacted of concern statewide.

Preschool and Child Care: Universal Preschool
The growing disparity between preschoolers who have early childhood education and those who do not is of continuing concern. In particular those who do not receive an early childhood education due to socio-economic status will most likely never be able to compete in the educational arena on equal terms with the “haves.” For English learners the preschool experience helps oral language which is first step to literacy.

Solution: Legislation to provide Universal Preschool did not succeed during the last state legislative cycle and is being introduced in the new legislative year. Universal Preschool is seen as a giant step forward in securing preschool experience for all children, breaking down economic barriers and providing the social skills and learning “readiness” necessary to achieve in school.

Other issues on the radar related to universal preschool involve the quality of state funded school programs. One discussion centers on the question of whether all preschool teachers should be required to hold bachelors degree and then should their salaries be comparable to those paid to K-12 teachers. Preschool teachers earn about 20K per year and K-12 about twice that on average.

K-12
The issue of academic standards, teaching for tests rather than learning, the value of charter schools, and the needs and challenges of English learners are continuing policy concerns. Education achievement is still poorest in economically poor neighborhoods with limited resources contributing to the problem. It has also been documented that the K-12 crisis in preparing a diverse population for higher education affects the pool of future graduates and faculty pipeline, despite an increased growth in female graduate population.

The Movement to transform high school has begun, because too many high school students fail to graduate or need remedial courses to enter college. Given the knowledge base and demands of today’s economy, too many students leave school unprepared for college, work, or adult success. Solutions being proposed are at the heart of current debate: mandatory college preparatory curriculum vs. one that provides multiple pathways. Can multiple pathways be created without resorting to discriminatory tracking? If mandated could you end up disengaging and losing a significant part of student body? What about female students and stereotypes used to track girls and women into traditional female fields, instead of opening up opportunities to non-traditional fields that tend to be higher paying and provide economic independence.

Higher Education: With changes in the workforce over the last 120 years, higher education is becoming less of a luxury and more of a necessity. By the year 2020, it is estimated that there will be 15 million new jobs requiring college preparation. As the skill requirements of jobs continue to rise, so too should access to postsecondary training for all students.

Special attention should be paid to the non-traditional student. Traditional students, who receive a high school diploma, immediately enroll in college full time, relied on parents for financial support and did not work during the school year, reflect around 25% of undergraduates. Nontraditional students include older, parenting and/or financially independent who cannot identify time to take enough courses to qualify for federal aid. Particularly for non-traditional female students, attending postsecondary schools at least part-time often means facing extra expenses such as child care and other dependent family care.
• Higher Education Act: the reauthorization of the Higher Education
Act, which is set to expire in the 108th Congress, offers a unique opportunity to help address the “skills gap” by making college enrollment, retainment, and graduation more accessible. The Higher Education Act authorizes programs and activities that fall into four main categories: student financial aid, support services to help students complete high school and enter and success in postsecondary education; aid to strengthen institutions; and aid to improve K-12 teacher training at postsecondary institutions. H.R. 4283
• On the state level, a CALWorks bill is being crafted to assist women attend college as part of their training and to stop the clock of diminishing assistance.

Education as Training: It was noted across the board that a solution often used to address economic and social issues is better education or specialized training. Re-entry and retraining were key to better pay equity and economic independence, Accessibility, availability and affordability were the necessary ingredients and standard to measure effectiveness of policy change.

Footnote: Excerpts from Senator Sheila Kuehl:
“K-12 education is taking a pounding from the Governor this year, although he has maintained the opposite. Complicating the issue of funding is that generally, the budget does not reflect the last year’s agreement between the Governor and the education community. In an agreement with teachers and school boards last year, the Governor suspended the minimum funding requirements of Prop 98 and underfunded schools by two billion dollars, on what was supposed to be a one-time basis, in order to help balance the budget. He agreed to restore the funding in the 2005-6 budget. During the current budget year (2004-5), new revenues would have added another 1.1 billion dollars to the schools under the Prop 98 minimum. That, also, was not paid.

Now, in his proposal for 2005-6, the Governor neither restores the 2 billion dollars nor the 1.1 billion extra, which should go to the schools. It is clear he has no intention of keeping his promise to the school communities. Instead, surprisingly, he has decided to attack Prop 98 itself, an initiative overwhelmingly adopted in a statewide vote of the people, and proposes amending it to reduce the guarantee of monies for the schools even further.
Across The Board Cuts: Instead of the minimum guarantee, the Governor proposes a Constitutional amendment to change the state’s budget process by requiring an automatic across the board reduction in every area, including education, when state revenues are less than state expenditures. The Governor’s Director of Finance would be the person to declare when that happens, without regard to other factors of timing and revenue.
The Governor also wants to completely eliminate the maintenance factor built into Prop 98. Maintenance monies already owed to the schools, almost 4 billion dollars to date, would be paid off over a 15 year time period, but there would be no new money. This means billions of dollars in lost opportunities in investment in our schools (and community colleges-see my next essay).

The Phantom “Increase”: The Governor has also maintained that his budget for K-12 is more than last year. That fudges the truth because it ignores what the budget should have been with the two billion dollars given up by the education community and the 1.1 billion that should have been added as the economy improved this year. Taken this way, if you look at what the minimum guarantee of Prop 98 would have required, the funding is actually a decrease.

The Good News-Growth and Categoricals: The budget does propose to adequately fund proposed growth in numbers of students and increases funding for categorical (special, targeted) programs by almost 4%, while giving school boards more flexibility in spending that money. But: Districts Must Pick Up State Teacher Retirement.

Everything the budget gives to education, as indicated above, it takes away in spades. It reduces non Prop-98 state general fund contributions to the California State Teacher’s Retirement System (CalSTRS) by $560 million. This eliminates all general fund support for CalSTRS and shifts all the costs to the school districts and to teachers. (to pay how?) The Gov. also projects an additional “savings” of $100 million because not giving general fund money to CalSTRS saves administrative costs (no contributions, no paperwork).