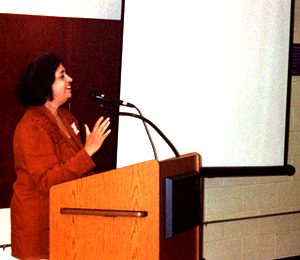 The Santa Clara County Commission on the Status of Women,
The Office of Women’s Policy and
California Women’s Agenda
Invites You To The 2007 Northern California CEDAW Summit

The purpose of this multi-county meeting is to bring attention to CEDAW activities throughout Northern California and coordinate CEDAW efforts by various groups. It is a good opportunity for all interested in women’s rights as human rights to interact with each other and for planning new collaborative activities around the issue. Attending this conference will be an ideal starting point for statewide action

Among the progressive forces in Santa Clara County is the Women’s Action Network, (www.womensactionnetwork.org) WAN, a legislative and advocacy coalition has recently has taken on efforts to develop a women’s center in Silicon Valley. The vision is to create a multi-purpose center that serves as a HUB for women’s activities in Santa Clara County and as a central location for information related to women and gender issues. The center was launched on Dec. 6 2006 in San Jose, for more information go to: www.cardeacenterforwomen.org

Equally vibrant and active is the Commission on the Status of Women, which advocates on behalf of women & girls for their full participation. We are proud of this year’s activities and programs. Our Annual Women’s Equality Day Breakfast and Award Ceremony is traditionally one of the largest celebrations of the year in Santa Clara County honoring Women and Girls. This year the theme was “Women of Strength and Spirit.
One of the proudest achievements of the CSW was the initiation of the Santa Clara County resolution supporting the UN human rights treaty – The Convention on the Elimination of All forms of Discrimination Against Women (CEDAW). A task force was convened to create awareness about CEDAW’s principles though a human rights training model.

The advocacy initiative this year in the jail system earned CSW national recognition and a National Outstanding Achievement Award for helping to steer State legislation to banning the shackling of pregnant inmates during labor. California Assembly woman Sally Lieber championed this legislation as part of her prison reform efforts.

Keep your eyes on the women in the South Bay – We are on their way to greater milestones!

Office of Women’s Advocacy: The Board of Supervisors created the first known Office of Women’s Advocacy in the nation to promote special programs in support of women and girls, to serve as a catalyst for change, and to provide a focal point for the coordination of programs. The Office coordinates closely with the Commission on the Status of Women, but works independently and reports directly to the Board of Supervisors. The Office was operational in August 1998.

Board Resolutions: In 1999, The County Commission on the Status of Women and Office of Women’s Advocacy collaborated to have Resolutions passed by the Board of Supervisors supporting CEDAW, and commemorating Women’s History Month and Equal Pay Day.

Work Life Coalition Project: In late 1999, The Commission on the Status of Women and Office of Women’s Advocacy developed a proposal to the Board for the creation of a Work Life Coalition to partner with businesses and public entities to offer employees family friendly benefits and programs.

Domestic Violence Council: The Council was established by the Board of Supervisors in 1991 with representation from the Judiciary, District Attorney’s Office, law enforcement, the local Bar Association, Probation Department, and community organizations. Through the work of a dozen working committees, the Council examines domestic violence issues and makes recommendations re: administrative and legislative remedies. Highlights include the development of DV Medical and Probation protocols; publishing a comprehensive DV Death Review Report; the implementation of the AWARE Program (which was created by ADT Security Systems to help protect DV victims by giving them emergency necklace pendants and electronic systems to alert police); the creation of a DV Resource Card, published in three languages for distribution by law enforcement agencies; a comprehensive evaluation of housing needs of victims of violence; filing of restraining orders by FAX, with the orders entered into a central repository at the Sheriff’s Department eliminating the need to serve them at affected law enforcement agencies; and prosecution of DV cases through a specialized DV Unit in the District Attorney’s Office. Future work will include expanding efforts into the workplace and local schools to provide education and prevention programs.

Women & Girls 2000 & Beyond: The Office of Women’s Advocacy initiated this project to focus on critical issues affecting women and girls. The issues were selected by modifying the Beijing Conference 12 Platforms for Action and adding Older Women as a separate issue. The project was designed to generate an assessment of the needs and status of women and girls in the county and to develop a strategic plan and local initiatives to address the identified issues. A Planning Committee and eleven Task Forces were convened to conduct the needs assessment. Each Task Force outline was folded into a Draft Status Report, which was the focal point for discussion at a January 21, 2000 community forum. The forum focused on the critical issues, needs and wishes in each area. Comments will be incorporated into the Draft Report along with all other comments received following the conference. The final report will be distributed in late March. The strategic planning phase will begin in April and will culminate with a Countywide Summit for local leaders and women’s advocates in November 2000 to adopt a proposed strategic plan and recommended local initiatives.

Highlights from the Draft Status Report in each of the areas include:

Decision Making and Leadership: Data showed we need increased roles for women in leadership in the areas of health, law enforcement, the judiciary and the corporate world.

Education and Training: Issues included encouragement and support for girls in science, math and technology courses; gender equity issues; and the need for support services for women to be able to obtain a higher education and training for higher paid jobs.

Environment: We need to obtain high tech industry cooperation in collecting employee data to allow us to determine the correlation between incidence of cancer and place of employment, as well as to develop training and prevention programs.

Girls: Key issues include gender equity in schools; self esteem and self image concerns; and increased participation of girls in science, math and technology programs.

Human Rights: The focus was on women in the jail system: immigrants and asylum issues; rights of disabled women; sexual harassment in school environment; rights of gays, lesbians, transgendered and transsexual persons; and hate crimes.

Media: Highlights included the lack of female presence in leadership and programming positions in TV, Radio and print media, as well as the continued negative portrayal of women and girls.

Older Women: The focus was on maintaining economic self-sufficiency and independence for older women; in home support services for older, frail seniors; and adequate wages and retirement income for older women.

Poverty: Issues included a continued focus on Welfare-to-Work programs and the affect on low income women and families; job training and placement in jobs with a living wage; access to technology; and achieving economic self-sufficiency.