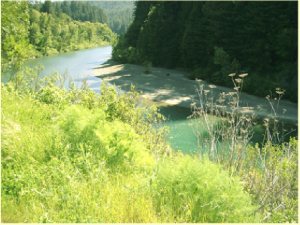 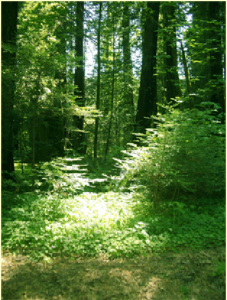 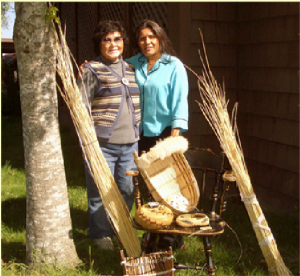 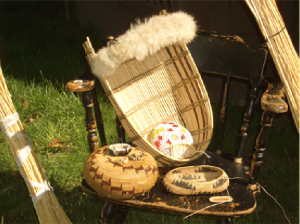 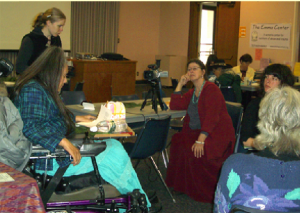 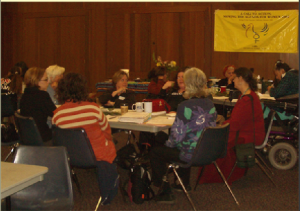 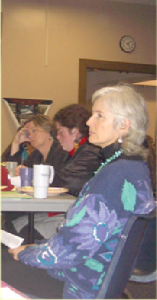 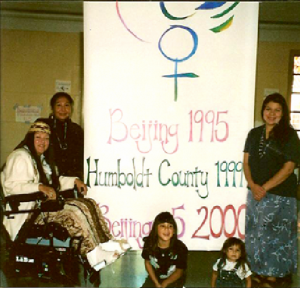 A Call to Action to the Women of Humbolt County

They met in circles and talked about who they are, what their issues of concern are and what they want done about them. Included in the ‘talking circles’ were several women from the Hoopa, Yurok, Tolowa and Wailaki First Nation Tribes of Northwest California, joining with women of all ages with co-sponsors CAWA, CirclesWork , Women’s International League For Peace and Freedom, United Way, New Games, Women’s Resource Center, Women’s Studies, and Associated Students of Humboldt State University, Multicultural Center. This ‘Call to Action’ was made possible by a grant from the AT&T Foundation.

Summary Action recommendations from the full circle are to:
• Hold an Environmentally Focused Call To Action on the North coast.
• Plan a Humboldt County Lobby Day in Sacramento for a voice in California public policies.
• Get access for everyone in Humboldt rural region on the Internet.
• Follow-up the 1977 Seven Year Study on California Indian Policy, there has been no response.

See the full list of priority concerns and action recommendations. In the meantime, we want your feedback on these issues and other critical concerns, also send resources and strategic suggestions to us at:  Cawa Contact , or Jene McCovey.

We are grateful for our “Digital Divide” project partnership with AT&T Foundation, who made it possible for indigenous, farmworker, and immigrant women to have their voices heard in California.

The north coast is unique in its natural beauty and geography with ancient redwood trees and rocky ocean coastline. Humboldt County has approximately 130,000 inhabitants including the largest population of Native Americans in the state of California. In the city of Arcata, which is home to Humboldt State University, the City Council is dominated by the Green Party. In 1998 the Utne Reader deemed the city of Arcata in the north of the County one of the nation’s ten most “enlightened” communities. Southern Humboldt reflects more political diversity. Life is simpler in this rural area than in many other parts of California. However, compared to many other areas of the state, there are high rates of poverty, mental illness, substance abuse, child abuse and domestic violence. This is due in part to the isolation of the region and the lack of industry aside from forestry and fishing, both in decline. Despite these grim distinctions, alternative health, medicine and spirituality have a long history in Humboldt. In addition, the County is distinguished by having the largest number of artists per capita anywhere in the nation. There is a strong environmental activist movement here as well as a powerful organized women’s community.

In August our local CAWA planning committee identified six priorities from the 12 Platform Issues. These were the environment, poverty, health, violence, human rights and the girlchild. Humboldt State University campus provided the venue and access to student volunteers. Two small internal university grants were awarded and used to fund four hours of digital videotape of the conference, edited to 20 minutes; an honorarium for the keynote speaker; a donation to the teen outreach theater group, Spare Change, which presented issues of the girlchild; transcription of a two-hour focus group which followed the conference. Our conference began Friday evening with an inspirational supportive speaker-phone call with environmental activist Julia Butterfly from the tree “Luna.”

Best practices indicate that Humboldt County led the nation in 1965 in creating the first Human Rights Commission (HRC) following passage of the Civil Rights Act. The HRC has created the following: a city and county partnership for training, with access to education for the homeless; “objective observers” unique to human rights commissions to witness and monitor issues such as the Headwaters dispute; the Domestic Partnership Ordinance; the Hate Crimes Information Network hotline; the Committee on Law Enforcement Matters to investigate racial profiling.

Humboldt County is an exceptional area for the integration of services for childbearing women. Our fetal mortality rate is low. Babies are healthy. There is good communication between midwives and doctors. Grassroots care has been provided with a 20-year birthing program of Certified Nurse Midwives and doulas. Health and wraparound services work well together. We have three drop-in clinics.

Three concerns are access to higher education and jobs that lift people out of poverty; affordable child care; affordable housing.