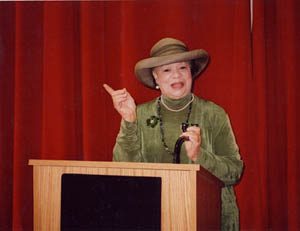 A native of Brooklyn, New York, Aileen Clarke Hernández migrated to California in 1951 to become an organizer and later the Education and Public Relations Director for the Pacific Coast Region of the International Ladies’ Garment Workers’ Union. After eleven years with the union, she was appointed by California Governor Edmund G. “Pat” Brown as Assistant Chief of the California Division of Fair Employment Practices where she served from 1962 through 1965. With the passage of the national Civil Rights Act of 1964, President Lyndon Baines Johnson appointed her as the only woman member of the new United States Equal Employment Opportunity Commission. Frustrated with the limited power of the civil rights agency, she resigned after eighteen months as a Commissioner, returned to San Francisco and founded her own urban consulting firm in 1967. The firm works with major American companies, governmental agencies, and community-based organizations on a wide variety of issues facing cities – such as housing, employment, education, sustainable development and transportation. She appears frequently on television, radio and the lecture circuit discussing race and gender relations, human rights and civic activism. She has been a consultant to United Parcel Service (UPS) for many years and is a member of their Corporate Diversity Council.

On a volunteer basis, she is State Chair Emerita of the California Women’s Agenda (CAWA), a network of 600+ organizations serving women and girls; the Coordinator for Black Women Stirring the Waters which has published a book of personal essays written by 44 of its members; and Chair of the Coalition for Economic Equity, which advocates for increased government contracting opportunities for businesses owned by women and minorities. She was the second national president of the National Organization for Women (NOW).

Her travels throughout the world (China, Latin America, Europe, the Caribbean and Africa) have given her a global perspective on equity issues. She was a member of a national, foundation funded commission studying US foreign policy in Southern Africa which, in 1981, produced an internationally acclaimed and prophetic report, South Africa: Time Running Out. She is one of the 1000 women collectively nominated for the Nobel Peace Prize in 2005.